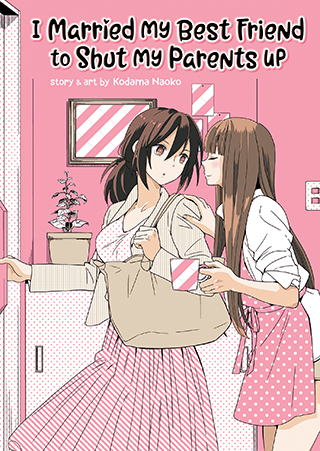 At some point, whether it was while watching a reality television show, seeing some kind of scandal online or in the press, or hearing just from other people, we’ve all heard about some kind of fake marriage. Some have gone into fake marriages with complete strangers in order to gain citizenship in certain counties. There was even news circulating about fake public marriages in order to hide some kind of secret publicity stunt. And even in some media, we’ll see a plot of a movie or novel where two people got drunk and married in Las Vegas.

But have you heard about people who married their best friend so that their parents would leave them alone? In case you didn’t pay attention to the title of the manga, that’s actually the main plot of this new story.

Published by Seven Seas Entertainment and written by the author of NTR Netsuzou Trap, Kodama Naoko released a new standalone manga that hits the heartstrings of yuri romance fans. I Married My Best Friend to Shut My Parents Up follows the story of Morimoto, a young female professional who’s parents won’t leave her alone about settling down and marrying a man. END_OF_DOCUMENT_TOKEN_TO_BE_REPLACED